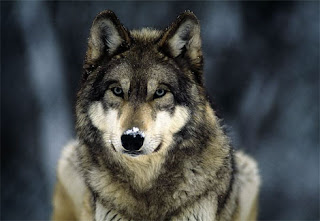 Jamie Rappaport Clark, president of Defenders of Wildlife, has some breaking news for all of us:
Yesterday, the Idaho Department of Fish and Game confirmed the state is moving forward as soon as weather permits with plans to have the federal Wildlife Services agency kill as many as two thirds of the wolves in the Lolo District of Clearwater National Forest – possibly leaving only 25 or 30 wolves in the district in a misguided attempt to increase elk numbers for hunter harvest.

Help us stop the killing. Please donate now to support our all-out campaign to stop this ill-conceived and unscientific wolf cull.

The killing could begin within days, when snowfall and a break in the storm in the area will make it easier for federal agents in helicopters to find, target and kill wolves in this wild area of Northeastern Idaho.

According to the Idaho Department of Fish and Game director, if Wildlife Services -- the federal agency charged with the killing -- is allowed to move forward with this plan, the state hopes to expand the use of federal dollars and aerial culling to other national forests in Idaho.

The Obama Administration has not yet indicated how it will respond to Idaho’s request to use federal money and staff to kill these wolves on federal lands, or why it would be justified in doing so since these wolves are on federal lands and not in major conflict with livestock.

That’s why today Defenders is launching a new comprehensive campaign to stop aerial wolf killing in the Lolo District and help ensure an interconnected, sustainable population of these ecologically important animals remain in the region.

Donate now to help stop the killing and save the lives of wolves.

In the next week – with your help –we will launch an outreach plan to make more people aware of this plan, including in media outlets locally and across the country.

We’ll put pressure on federal officials to not participate in Idaho’s unjustified wolf killing plan, including Secretary Tom Vilsack (who oversees the agency that would execute the wolf killing plan in the Lolo District) and President Obama. And we’ll continue to work with ranchers to reduce conflicts with wolves, saving the lives of these amazing and important animals.

This will be a difficult fight, but I believe that our efforts can prevail – with your help. Please donate now to support efforts to save Idaho wolves and other imperiled wildlife.

To support our vital advocacy efforts in the coming days we need to raise at least $50,000 by Monday. Will you help?

The aerial wolf killing plan is not the only new threat to wolves in Idaho.

The Idaho Fish and Game Commission is reportedly investigating the possibility of no limits on people killing wolves on private land, similar to practices in Alberta and British Columbia, Canada, where wolves are far more numerous.

And the chairman of the Idaho Fish and Game Commission even indicated that the state may reclassify wolves as predators under state law – effectively engaging a shoot-on-sight plan similar to Wyoming’s awful plan.

The state reports that pack sizes are down. It also appears that young, less experienced wolves have been the most likely to be killed under Idaho’s wolf plan.

We need to restore science to wolf management in Idaho, and Defenders needs your help to do it. Please donate whatever you can to support our work now.

With Gratitude,
P.S. Please make a secure donation online now, so we can put your contribution to immediate use saving wolves and other wildlife. Or, you can donate by phone by calling 1-800-385-9712.
Posted by VIRGINIA BERGMAN at 2:27 PM