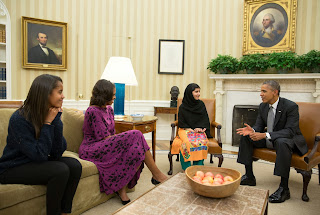 The chief selling point for America's drone program is that rather than the mass killing of all out war, drones allow us to violate the boundaries of other nations, e.g., Pakistan, and kill targeted individuals. Of course, that's based on the either-or fallacy that all out war or drone attacks are the only U.S. options. It seems the White House, under both Bush and Obama, has consistently refused to consider a comprehensive approach to fighting terrorism, which would include education and outreach.

Today the Huffington Post headline above Matt Sledge's article reads: Why did America kill my mother?

WASHINGTON -- He thought little of the U.S. drone buzzing over his family's house one day last year, its incessant sound just one more addition to the rhythm of daily life in northwest Pakistan.

As he walked home from school, his grandmother told him to eat a snack before coming to the field to help her pick okra. It was the eve of one of the holiest holidays in Islam, when they would gather for a favorite family dish. He went outside.

Dum, dum -- the sounds of missiles pierced the air.

"All of a sudden things became very dark," Zubair Rehman, 13, remembered. The next thing he knew, his grandmother, Mamana Bibi, was gone. "It was like she was exploded to pieces."

Posted by VIRGINIA BERGMAN at 10:13 AM No comments: Links to this post

It's my understanding that Ronald Reagan was the first to use the term "entitlements" in reference to Social Security and Medicare. Since then political leaders have chosen to use "entitlements" to cover their suggestions to gut programs to aid the poor and the elderly. Well, yes, Democrats toss the term around as well, including President Obama. Guess what? Those "entitlements" are on the precipice again as Congress considers a new budget.

In response to Zach Carter at the Huffington Post, yes, it's legitimate for the public to worry whether the Democrats will cave on Social Security and Medicare:

WASHINGTON -- Sen. Dick Durbin (D-Ill.) on Sunday opened the door to Social Security cuts as part of a budget deal with congressional Republicans. But Durbin pushed back against GOP calls for entitlement cuts as the negotiating price to curb or extinguish the economically damaging sequester cuts.
"If this is the bargain that the Republicans are now pushing for, that we have to cut Medicare to avoid cuts at the Department of Defense, they need to take a step back," Durbin said on "Fox News Sunday."
Congress is currently negotiating a new budget, with a December deadline. The talks were mandated by last week's deal to raise the debt ceiling and end the government shutdown.

Also speaking on "Fox News Sunday," Sen. Roy Blunt (R-Mo.) explicitly offered up trading some of the short-term cuts mandated by the Budget Control Act, known as the sequester, for long-term Social Security and Medicare cuts. He argued that Republicans had the tactical advantage on such an exchange.

"If you're in a divided government and you're arguing against the law, you're at a disadvantage," Blunt said, noting the failed GOP effort to defund Obamacare that resulted in a government shutdown. "The Budget Control Act is the only thing we've found that actually controls spending."

Blunt said that if Democrats aren't willing to negotiate over "entitlement savings versus some additional spending," to ease the sequester, then Democrats will have to live with the sequester cuts.

Posted by VIRGINIA BERGMAN at 9:05 AM No comments: Links to this post

Little cause to celebrate as shutdown ends

Americans have little cause to celebrate this morning even though Congress finally ended the government shutdown. Possibly the most noteworthy part of the negotiations that led to the resolution of the fiscal crisis is the leadership role played by women leaders in the Senate. Nevertheless, good citizenship requires at least taking a look at the short, medium, and long-term results of the bill spelled out in the Decoder Wire (Christian Science Monitor) by Peter Grier:

Yes, it’s finally over. The US government reopened Thursday morning, and the Treasury prepared for a normal day of paying the nation’s bills after Congress approved a bill to raise the debt ceiling and end the 16-day federal shutdown.

President Obama signed the measure into law shortly after midnight Thursday.
In the short term, the resolution of the fiscal crisis represented a decisive defeat for congressional Republicans. At the urging of tea party-aligned conservative members, the House GOP at first demanded the defunding of Obamacare in return for continued government spending. What it got was a slight tightening of procedures for the verification of income levels for those applying for Obamacare subsidies.


RECOMMENDED: The debt ceiling battle explained in 12 charts
The legislation also sets up a process for a House-Senate conference on a long-term budget and tax plan for the nation.

“We fought the good fight. We just didn’t win,” said House Speaker John Boehner in an interview with an Ohio radio station.

More:
Posted by VIRGINIA BERGMAN at 11:04 AM No comments: Links to this post

Promoting social justice onstage and in the classroom

I had the privilege yesterday of meeting Sarah Bellamy in person and sitting in on Bearing Witness, the class she's teaching at United Theological Seminary of the Twin Cities. Sarah is the daughter of Lou Bellamy, the founder of Penumbra Theatre, where she serves as associate artistic director. Like Penumbra, Sarah's class focuses on the theatre and storytelling as powerful tools to bring about social change.

Watch the video below of Sarah's talk at United's spring convocation last April:

Posted by VIRGINIA BERGMAN at 1:01 PM No comments: Links to this post

Posted by VIRGINIA BERGMAN at 6:46 AM No comments: Links to this post