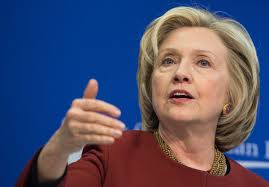 Love this article from Vox that pretty much says it all regarding the media's negative bias against Hillary Clinton:

A new Quinnipiac University poll shows Hillary Clinton coasting to a crushing victory in a three-way race against Bernie Sanders and Joe Biden, winning 45 percent of the vote, compared with 22 for Sanders and 18 for Biden.

And the good news for Clinton doesn't stop there.
So how did the media report this poll showing that if the election were held this week Hillary Clinton would win? Well, as bad news for Hillary Clinton!

Elephant extinction in your lifetime?

When you think of the beauty and dignity of an elephant, the email below from Defenders of Wildlife will break your heart. May each of us do what we can to prevent this crisis in our wildlife family.

Posted by VIRGINIA BERGMAN at 11:48 AM No comments: Links to this post


Well, the Huffington Post headline tells us, “Jill Not Sold On Potential Biden Run.” The reasons the article gives avoid one of Joe’s weaknesses that perhaps his wife knows better than anyone else. The article mentions the grief the family is experiencing in the aftermath of Beau Biden’s death as a major source of Jill’s resistance to Joe’s candidacy in 2016. Could be, though, the thought of her gaffe-prone husband being elected president makes her a little nervous; as well it should.

As President Obama hinted in his introductory remarks in March 2010 at Northern Virginia Community College in Alexandria, Virginia, Vice President Biden could be a problem now and then:  Introduced by Dr. Jill Biden, the vice president's wife, Obama said, "Thank you Dr. Biden for that outstanding introduction, and for putting up with Joe"

You have to wonder how many heads of state would be as gracious as Jill in putting up with Joe Biden’s unfortunate gaffes.

But then anti-Hillary Democrats are becoming increasingly desperate in their search for a candidate to oppose Hillary Clinton in the 2016 primary. The politically inexperienced Elizabeth Warren has enough common sense to refuse to run; Socialist maverick Bernie Sanders would have to lunge even farther to the center than Obama did in order to get elected; and Joe Biden, most well known for his gaffes, would likely embarrass the Dems or more accurately, the Dims, even before his nomination.

It’s time for the Democratic Party to get its act together and throw its full support behind its most experienced, politically savvy, and authentic candidate  – what you see is what you get with Hillary.
Posted by VIRGINIA BERGMAN at 11:42 AM No comments: Links to this post 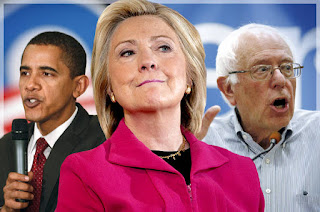 The current infatuation with Bernie Sanders by the ultra left wing of the Democratic Party has a déjà vu flavor to it. Back in August 2008, I noted here at Katalusis:

Barack Obama gained the rabid support of the Democratic Party’s left wing by promising among other things to first unify the nation and then ride forth to bring peace and harmony to the entire world. He assured his followers that no experience was required to perform this miracle; he would accomplish the feat solely by virtue of his singular personality. As Oprah so eloquently introduced Obama at a rally in South Carolina during the Democratic primary, “He’s the one we’ve been waiting for.”
So far the presumptive nominee, also known as “the one,” has not been able to unify his own party ahead of its national convention this August in Denver – even though his coronation is slated to occur before 75,000 onlookers seated in the Mile High Stadium at Invesco Field.

There are, of course, obvious differences between 2008 presidential candidate Barack Obama and 2016 candidate Bernie Sanders, a registered independent and self-described socialist, currently seeking the Democratic Party nomination. Age and political experience, for one thing – in those respects, Sanders far outweighs the One in his 2008 heyday. But it must be said that Sanders may even surpass Obama in the promises the Vermont senator makes to score big on major Democratic Party issues on foreign policy, environment, same sex marriage, health care, and the economy.

Adding to the déjà vu experience, Sanders, like his predecessor, is taking aim at frontrunner Hillary Clinton. In an attempt to bring giddy left wing Democrats back to earth, a reminder is in order: as soon as Obama secured the Democratic Party nomination, the candidate who presented himself as above politics, suddenly lunged to the center. Obama’s supporters explained their idol’s about face was necessary in order for him to defeat John McCain in the general election.

Does anyone reading this now care that soon after he took office, President Obama, winner of the Nobel Peace Prize for his good intentions, ordered drone invasions of other nations. Keep in mind that our president has seemed unconcerned that innocents, who were not on his secret “kill list,” often died at his behest; they just happened to be in the wrong place at the wrong time.

All of the above is to suggest that if he succeeds in winning the Democratic Party’s nomination, Socialist Bernie Sanders may have to do as Obama did in the summer of ’08. Can’t you just see it? Sanders planting his feet firmly on centrist ground and disavowing his long history as a Socialist. “Well,"  his supporters will justifiably ask, “How else can Bernie win the general election?”

Let me suggest here that the Democratic Party might well stick with Hillary Clinton this time around. With Hillary, what you see is what you get, and no about faces will be required in order for her to win the GE. See, folks? What Hillary has got in full measure is authenticity and unlike Obama and Sanders, she doesn’t claim to be above politics.
Posted by VIRGINIA BERGMAN at 1:56 PM No comments: Links to this post

Thought you'd also like to get the facts about Hillary Clinton's emails:

You might hear some news over the next few days about Hillary Clinton's emails. Because you are an important part of this team, we wanted to take a few minutes to talk through the facts -- we need your help to make sure they get out there.

There's a lot of misinformation, so bear with us; the truth matters on this.

Here are the basics: Like other Secretaries of State who served before her, Hillary used a personal email address, and the rules of the State Department permitted it. She's already acknowledged that, in hindsight, it would have been better just to use separate work and personal email accounts. No one disputes that.

The State Department's request: Last year, as part of a review of its records, the State Department asked the last four former Secretaries of State to provide any work-related emails they had. Hillary was the only former Secretary of State to provide any materials -- more than 30,000 emails. In fact, she handed over too many -- the Department said it will be returning over 1,200 messages to her because, in their and the National Archives' judgment, these messages were completely personal in nature.

What makes it complicated: It's common for information previously considered unclassified to be upgraded to classified before being publicly released. Some emails that weren't secret at the time she sent or received them might be secret now. And sometimes government agencies disagree about what should be classified, so it isn't surprising that another agency might want to conduct its own review, even though the State Department has repeatedly confirmed that Hillary's emails contained no classified information at the time she sent or received them.

To be clear, there is absolutely no criminal inquiry into Hillary's email or email server. Any and all reports to that effect have been widely debunked. Hillary directed her team to provide her email server and a thumb drive in order to cooperate with the review process and to ensure these materials were stored in a safe and secure manner.

What about the Benghazi committee? While you may hear from the Republican-led Benghazi committee about Hillary's emails, it is important to remember that the committee was formed to focus on learning lessons from Benghazi to help prevent future tragedies at our embassies and consulates around the globe. Instead, the committee, led by Republican Representative Trey Gowdy, is spending nearly $6 million in taxpayer money to conduct a partisan witch-hunt designed to do political damage to Hillary in the run-up to the election.

Hillary has remained absolutely committed to cooperating. That's why, just as she gave her email server to the government, she's also testifying before the Benghazi committee in October and is actively working with the Justice Department to make sure they have what they need. She hopes that her emails will continue to be released in a timely fashion.

It's worth noting: Many of the Republican candidates for president have done the same things for which they're now criticizing Hillary. As governor, Jeb Bush owned his own private server and his staff decided which emails he turned over as work-related from his private account. Bobby Jindal went a step further, using private email to communicate with his immediate staff but refusing to release his work-related emails. Scott Walker and Rick Perry had email issues themselves.

The bottom line: Look, virginia, this kind of nonsense comes with the territory of running for president. We know it, Hillary knows it, and we expect it to continue from now until Election Day.

It's okay. We'll be ready. We have the facts, our principles, and you on our side. And it's vital that you read and absorb the real story so that you know what to say the next time you hear about this around the dinner table or the water cooler.

Take a look at more details here, including a complete Q&A, and pass them along:


Posted by VIRGINIA BERGMAN at 1:51 PM No comments: Links to this post

The obsolete preactice of trying to resolve international disputes through violence

Thanks to my friend Jan Mundo for posting the message below from the Dalai Lama:

Posted by VIRGINIA BERGMAN at 8:39 AM No comments: Links to this post

What does it cost to make the corporate world behave?

Dear Katalusis readers, are you as shocked as I am by the time, effort, and money required to stop corporations like Shell Oil from despoiling America's natural resources?

Read this email message that just hit my inbox this afternoon and share the disgust I feel with corporate America's focus on profits at whatever the cost to our environment:

Posted by VIRGINIA BERGMAN at 1:53 PM No comments: Links to this post