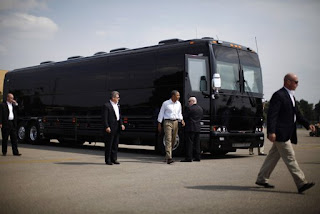 Maureen Dowd’s acerbic, literary style is at its peak as she chides President Obama in today’s NY Times column, Of dystopias and alphas, and incidentally gives a favorable nod to Bill Clinton. One has to ask, though, where was Dowd’s razor sharp intellect in 2008 when she followed the lemmings over the cliff in support of Obama while doing her utmost to destroy both Bill and Hillary Clinton?
Ah, well, perhaps we can still enjoy seeing Dowd’s talent rescued from the trash bin of history and put to better uses in the summer of 2011:
President Obama was on the way to Alpha when a plea came for him to be, well, more alpha.


LuAnn Lavine, a real estate agent from Geneseo, a rural town just up the road from Alpha, Ill., the last stop on the president’s Midwestern bus tour, told The Times’s Jeff Zeleny: “Everyone was so hopeful with him, but Washington grabbed him and here we are. I just want him to stay strong and don’t take the guff. We want a president who is a leader, and I want him to be a little bit stronger.”


Hers was a gentler message than the sign stuck on a post outside Alpha: “One Term President.”


But her three words summed it up: Washington grabbed him. Why did this man whose contempt for Congress is clear, who ran on the idea that he could transform a broken Washington, surrender to its conventional timetable and bureaucratic language?
Read more:
Posted by VIRGINIA BERGMAN at 2:02 PM