The Supreme Court’s ruling on Obamacare 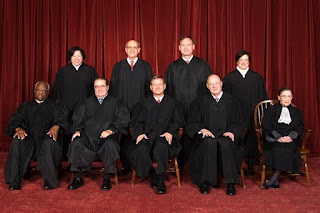 One cannot begrudge the affirmation of the right of all Americans to health care coverage as provided in the Affordable Health Care Act, upheld this morning by the U.S. Supreme Court. The Washington Post offers complete coverage of the decision and how the provisions of this landmark healthcare act will continue to unfold:
The Supreme Court upheld the constitutionality of President Barack Obama’s health care law, including the most disputed part: the mandate that virtually all Americans have health insurance or pay a fine. The mandate was upheld under the federal government’s power to levy taxes.
The ruling put some limits on the law’s plan to expand the Medicaid insurance program for the poor, a joint effort of the federal government and states. It says the U.S. government cannot threaten to withhold a state’s entire Medicaid allotment if it doesn’t participate in the expansion.
Chief Justice John Roberts sided with the court’s four liberal justices — Stephen Breyer, Ruth Bader Ginsburg, Elena Kagan and Sonia Sotomayor — to form the 5-4 majority.
Read more:
Posted by VIRGINIA BERGMAN at 10:48 AM