A thunder snowstorm in mid-April? 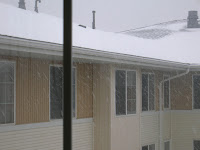 The snow is falling steadily in St. Paul this April morning, and I just heard the rumble of thunder. Thunder snowstorms are special occasions in my world as they remind me of a favorite anecdote from when my two children were toddlers, which I commemorated in a column I wrote for our local suburban newspaper a few years ago. (Also published previously here at Katalusis.)

It must have been early March some years ago in Ohio when a loud crash of thunder awakened me in the middle of the night. My children were just toddlers then and moments later, I heard my daughter Jean scamper across the floor above me. My son Steve, the younger of the two, plodded after her.


Rushing upstairs to check on them, I stopped short near the top step; they stood side by side, gazing out the window in Jean’s room. Suddenly, Jean turned around. In her bunny rabbit pajamas, her hands on her hips, she said, “Mom, you are ‘be-sturbing’ us.”

Apologizing, I joined them at the window. It was snowing — large, fluffy white flakes. Lightning flashed, and thunder rumbled in the distance. March is the month when winter and spring customarily collide in their epic struggle. Even in Minnesota, spring usually wins. Here in Woodbury, I watch the drama unfold again, hoping as always to see another thunder snowstorm.

My neighborhood is a small island of fields and woods, nearly surrounded by freeway traffic. Despite the sound effects, I enjoy the illusion of country living. Having grown up in the country, I’ve long been attuned to seasonal changes in hours of daylight and darkness, weather patterns, and landscapes and skyscapes.

Beyond my windows, trees and bushes dance in the wind. Sometimes, three or four deer romp across the fields as if at play. Birds dart and soar across a wide expanse of sky. After an ice storm I once saw what appeared to be a large hawk clawing for a foothold on a slippery power line. He gave up in a huff, shook himself, and circled upward.

The simple pleasure of looking out the window whenever I choose to each day has been a big plus since my retirement from fulltime work. For several years, I’d been confined in a building 40 hours a week where only the privileged few had desks near a window, and yes, I felt deprived.

Among other gifts, a glimpse of the natural world now and then offers continuity to distant times and places.

Fiery evening light in Woodbury transports me to Doheny State Beach in southern California, where I’ve watched Catalina Island rise from the sea, back lit by the setting sun.

Local sunlight occasionally fades into a golden glow across the otherwise bleak landscape near Amarillo, Texas where I spent five months in tech school, completing the second phase of basic training in the United States Air Force (WAF).

Once in awhile, I find myself standing again on the banks of the wide Mississippi near St. Louis where I’ve seen the sun both rise and set.

Returning home to Woodbury from my imaginary wanderings, I feel connected to family and friends. Wherever we are in the present moment, the same earth turns beneath our feet, and familiar stars and planets keep us company on our cosmic journey.
And you can bet on it, if a loud crash of thunder awakens me in the middle of the night anytime soon, I’ll not roll over and go back to sleep. Without turning on the lights, I’ll slip out to the kitchen to sit by the window and watch the fireworks. I won’t be the least bit surprised if a couple of wide-eyed toddlers get there before me. I’ll try hard not to “be-sturb” them.

Posted by VIRGINIA BERGMAN at 8:18 AM