Jimmy Carter speaks out on America's use of drones 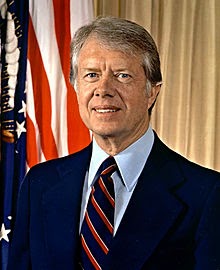 Throughout his presidency and the years since he left office, Jimmy Carter has consistently demonstrated the courage of his convictions. Whether he's addressing the Palestine-Israeli situation, the oppression of women in the church and throughout our culture, his critique of the NSA's surveillance overkill, or President Obama's love affair with drones, Carter tells it like it is:

Former President Jimmy Carter sat down with HuffPost Live on Tuesday to discuss his book "A Call To Action," throwing some cold water on the Obama administration's use of drones in the process.

When asked about his stance on the policy, Carter said he "would not" rely on drone warfare, arguing that they kill innocent people and aggravate hatred toward the United States.

"I believe it creates more additional terrorists, with the fervor of killing Americans, than we would be if we were not using the drones to kill people," Carter said of the policy.

You can watch the video of the interview with HuffPost Live here:

Posted by VIRGINIA BERGMAN at 4:18 PM