Fireworks on Lake Pepin and a Playground Bully 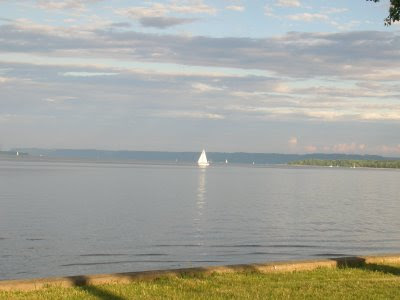 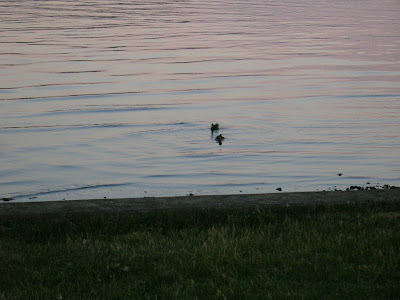 Two ducks near the shore of Lake Pepin. I wasn't quick enough with my camera to catch the third duck that kept harassing them.

Meandering south along the Mississippi this 4th of July was a great way to celebrate our nation’s independence. The traffic was light throughout most of the day, and I was in no rush to get anywhere. Just before I reached Winona I saw the Highway 14 sign and couldn’t resist the temptation to take a side trip west to Rochester and beyond to the small village of West Concord where my children grew up. I performed the ritual of circling the house where we used to live, driving down Main Street and back up State Street past the old elementary school and a few blocks further to the high school.

I headed south on Highway 56 and on an impulse turned left on the Wasioja Road to Mantorville where I once sat for hours in the Dodge County Courthouse to report the doings of the County Commissioners for my community newspaper. I’m here to tell you, the corn growing in southeastern Minnesota was past knee high this 4th of July; it was more like shoulder high. The skies were still cloudy with occasional raindrops hitting my windshield as I backtracked through Rochester to my endpoint in Winona, a small picturesque city on the river that boasts two universities.

I’d planned to return to St. Paul after dark so as to watch the fireworks from various locations along the way, but it was still daylight on my trek north on Highway 61. About a mile past Lake City, I pulled in at a rest stop, which to my surprise occupied choice real estate on the shore of Lake Pepin, a wide spot in the Mississippi. Only a few others were taking advantage of this lovely site when I sat down to read at a picnic table close enough to the lake to hear the waves lap against the shore.

I was distracted for a time by a pair of peaceful ducks and a belligerent third duck who kept harassing them. The bully would take flight, dive toward the pair, and skim the water at top speed to charge right into them. I thought he’d be content when a fourth duck came along and joined him. The peace lasted for only a few minutes. He looked across the water to see the other pair coasting along companionably and went after them yet again. Bullies will be bullies, I guess, even on a liquid playground.

The skies cleared just before dusk when a family that lived nearby joined me. They said they come to the rest stop every year where they can avoid the crowds and watch multiple displays from along the lakeshore. The full moon had risen before it was finally dark enough for the fireworks to start. I lasted until the first few bursts, but became chilled from the night air and decided to head home.

Traffic had picked up by then, and I had to keep my eyes on the road, but as I passed through first Red Wing and then Hastings, I heard the boom-ka-boom and caught glimpses of occasional rockets exploding against the night sky. It was a satisfying conclusion to my journey with its side trip to the old home place in West Concord, a small village that still holds many fond memories for me; why I even remembered to bow to that spectacular black maple tree in the back yard!
Posted by VIRGINIA BERGMAN at 2:06 PM