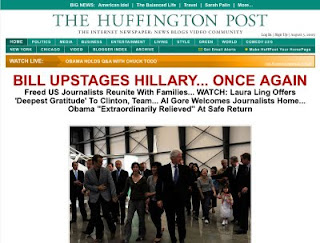 Who knew the Huffington Post would actually respond to an insurgency among its commenters? Checking back in, helenwheels wrote: “I left. How many thousands of posts did it take before they changed it?”
Yep. The Huffington Post changed its tabloid banner headline Bill Upstages Hillary Once Again (see my previous post), to the less inflammatory Freed journalists home in US after N Korea pardon.
Keep up the good work folks; it might be possible to reform the mighty Arianna after all - despite her cherished acceptance among the good old boys.
Posted by VIRGINIA BERGMAN at 7:35 PM