Mother’s Day Musings: "I Was a Stranger and You Took Me in" 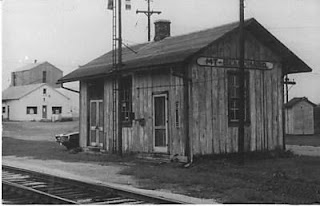 Tomorrow, May 10, is Mother’s Day, and the kids are taking me to the movies. I’ve been promised either Slumdog Millionaire or the new Star Trek, depending on what’s available. After reading Garychapelhill’s recommendation this morning, I’m kind of hoping for the new Star Trek.


I love being remembered on Mother’s Day, but this afternoon, I’m thinking of my own mother who died several years ago. A particularly poignant memory involves an incident that occurred in the 1950s when our family lived on the outskirts of a small village in northwestern Ohio.
Our house was perched on an embankment across the street from the Mt. Blanchard railroad station. My nephew David and I, ages eight and 10 respectively, often waved from the yard as the trains rumbled by, and we usually got a friendly wave or two in return.

That summer afternoon a one-armed man paced up and down the tracks as he waited to hop a freight. He was obviously one of the homeless wanderers who followed the rails through our small town from time to time.

Mama watched from our living room window. She was a mountain woman, transplanted a few years earlier with my father and their several children from Appalachia to northwestern Ohio. She brought with her from the hollows of southeastern Kentucky few worldly possessions and an indestructible faith, often citing a favorite passage of scripture:

“Naked and you clothed me, I was sick, and you visited me. I was in prison, and you came unto me.”

Others might have labeled the one-armed man a hobo, but to Mama he was a war veteran. This was the 1950s, and two of my three brothers were in the military: Kenneth was on combat duty in Korea, and Don was stationed at an airbase in Germany.

Mama rolled up a set of Don’s old work clothes and put them in a paper bag. On top of the clothes, she placed a couple of bologna sandwiches wrapped in heavy wax paper. She then instructed David and me to take the bag to the stranger.

Accepting our gift, the one-armed man smiled down at his scrawny, barefoot benefactors and said “God bless you.”
The next time the whistle blew, David and I beat Mama to the window. The train screeched to a stop, and our war veteran pulled himself up with his good arm, holding the paper bag tightly beneath the stub.

The sound of a train whistle every few hours during our years in Mt. Blanchard imprinted in my psyche a longing to travel. Following the example of my brothers, I enlisted in the Air Force right after high school. After basic training and tech school, I was stationed at Scott Air Force Base near St. Louis the first time I took the train home.

Enlisted personnel weren’t paid very much in those days, and I didn’t have a dime left after buying a round trip ticket to Toledo. In any case, I was too excited to worry about food or renting a pillow to rest my head.

As the train lurched forward, a five- or six- year old boy slid into the seat next to me. He never spoke, but nodded agreeably when I asked if he’d like to hear a story. My Appalachian heritage assured a knack for storytelling, and I’d polished my skills in long hours of babysitting nieces and nephews back home.

Every so often my young companion would get up and leave but he’d return within minutes — still without speaking — and I’d resume my tall tales. After dark he disappeared for longer than usual, and I figured he’d rejoined his parents for the night.

All was quiet that evening when the conductor came by to thank me. He explained the little boy I’d entertained throughout the day was his son. He handed me a thick steak sandwich and a glass of milk, and he gave me a pillow.

I finished my meal and got comfortable. As the train sped through the night, I heard above the engine’s roar Mama’s soft, southern-accented voice: “For I was hungry, and you gave me meat. I was thirsty and you gave me drink. I was a stranger and you took me in.”

Posted by VIRGINIA BERGMAN at 2:33 PM