America’s addiction to the Predator drone: “a tool for assassination from 10,000 feet” 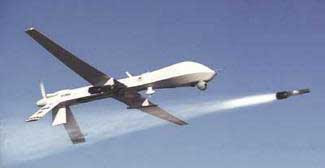 A few years ago another parent and I were exchanging emails expressing concern about the violence in video games. My friend remarked, “It seems the primary goal in some of these games — so popular with today’s teens — is to kill as many people as you can as quickly as possible.
“It’s as if killing is okay as long as it’s not real people. One day someone’s going to think: We’re not killing real people. We're just pushing a button, and some vaguely people-like beings on the other side of the globe disappear.”
When he made those remarks, I’m not sure either my friend or I was aware of weapons in the U.S. arsenal appropriately referred to as Predator drones.  Today, Predator drones are launched with the push of a button from sites within the U.S. where operators are taking deadly aim at targets in Pakistan, Afghanistan, and most recently in Libya. News reports chronicle daily the number of innocent civilians killed in these attacks.
One has to ask: are video games modeled after weapons already in use by our armed forces with such blatant disregard for human life, or is it the other way around?
The other day, the Washington Post’s David Ignatius protested Obama’s recent approval of the use of drones in Libya:
Ignatius wrote:
Drone attacks have become an addictive tool of U.S. national security policy, as illustrated by Thursday’s unfortunate announcement that President Obama has authorized their use in Libya.
Armed with Hellfire missiles, the Predator drone is a tool for assassination from 10,000 feet. It has been used by the CIA, with a paper-thin veneer of deniability, to attack al-Qaeda operatives and related targets in the tribal areas of Pakistan, where other weapons do not reach. One would like to think that’s a special case, born of the extreme threat posed on Sept. 11, 2001, and the remoteness of the tribal areas where the attackers are hiding.
But now we have Defense Secretary Robert Gates, accompanied by Gen. James Cartwright, vice chairman of the Joint Chiefs of Staff, stating at a news conference that Obama “has approved the use of armed Predators” over Libya—and, indeed, that the first mission was launched Thursday but aborted because of bad weather.
They did not state what targets the Predator had been assigned to strike. But surely it’s likely that the goal was to kill Libyan leader Moammar Gaddafi or other members of his inner circle.
Ignatius continued:
I wrote late last year that the problem with the Predators is that they provide too easy an answer to political and military problems. They Saudis asked for them last year to go after Yemenis they didn’t like; the Turks use them (looking over our shoulders) to target Kurdish extremists in Iraqi Kurdistan. And now the United States will use them to beef up a stalemated NATO campaign in Libya, on behalf of a rebel army that very well may include Islamic radicals who, under other circumstances, might themselves have been targets of Predator attack.
Read more:
Posted by VIRGINIA BERGMAN at 9:22 AM

Email ThisBlogThis!Share to TwitterShare to FacebookShare to Pinterest
Labels: drones in Pakistan and Afghanistan, Predator Drone in Libya, violence in video games