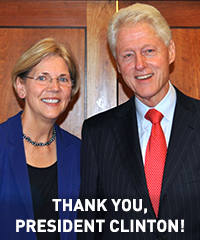 Elizabeth Warren earned my respect the day she first set foot on the national stage with her work in establishing the U.S. Consumer Financial Protection Bureau.

The U.S. senator- elect for the state of Massachusetts demonstrates a strength of character too often missing in American politics. For one thing, Warren deftly sidesteps Rovian-influenced Dems who would like to see party leaders like the Clintons and Obamas at one another’s throats.

As a Warren supporter from the get-go, I continue to enjoy emails from her campaign headquarters. Most recently, she reminds us that in her efforts on behalf of the middle class, she’s following in the footsteps of Bill Clinton, and she invites us to join her in thanking him:

Bill Clinton made headlines for his political speeches this year, but it is his tireless work to improve people's lives and create opportunity that really inspires me.

He often says that hard work, intelligence, and ability are equally distributed -- but opportunity isn't. That's why the Clinton Foundation focuses on providing opportunity where President Clinton sees it lacking, both here in the United States and around the world.

The election is over, and there's a lot of work ahead. But while we have this moment to catch our breaths, can you join the Clinton Foundation and me in thanking Bill Clinton for his tremendous efforts to help hard-working families?

Bill Clinton has spent his whole career fighting for the same thing.

Since leaving office, his foundation has helped provide access to life-saving HIV/AIDS medicine to over 4.5 million people. They've helped small business owners, smallholder farmers and entrepreneurs gain access to markets and investment capital to help their businesses flourish. They've helped our children have better schools, cleaner air and healthier nutrition so they all have the chance to succeed.

For nearly 40 years, Bill Clinton has continued to give a boost to people here in the United States and around the world to live their dreams.

I've told Bill Clinton personally how grateful I am for his leadership. Can you send him your own thanks today as well with a personal note?

Thank you for being a part of this,

Elizabeth
Posted by VIRGINIA BERGMAN at 8:27 AM