News media plays victim in its coverage of Hillary Clinton 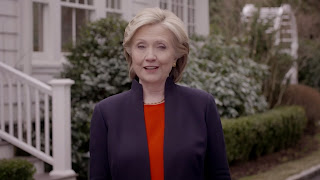 A pleasant surprise: almost objective coverage of Hillary Clinton at the NY Times. Amy Chozick reports on Clinton's visit to Cedar Falls, Iowa where she engaged with a news media that in the past has focused more on her hair style, clothes, and yes, the size and shape of her ankles than on her qualifications for the presidency.

The same news media continuously whines about receiving a cold shoulder from Clinton, the most admired woman in the world for 17 years.

I'm getting a little off topic here, but I wish our educational institutions would require journalism majors to master the art of critical thinking and shed whatever forms of bigotry colors their perspective, in addition to mastering basic journalism skills like the difference between the Times New Roman and Impact fonts. Hey, I took several journalism courses in college while earning my BA degree in English, concentration in writing.

But back to Cedar Falls, Iowa:

Hillary Rodham Clinton addressed reporters Tuesday, fielding questions on topics ranging from her personal wealth and her family’s foundation to the deteriorating situation in Iraq, saying at one point that she had “made a mistake” as a United States senator in voting to authorize the war in Iraq.
Mrs. Clinton, who has been criticized for weeks by Republicans and members of the national news media for her unwillingness to engage with the political press corps, approached journalists and answered five questions after a round-table discussion in Cedar Falls focusing on small business creation.

“I am so proud of the foundation,” Mrs. Clinton said in response to a question about the controversy surrounding foreign donations to the Clinton Foundation. “I’ll let the American people make their own judgments.”


Mrs. Clinton also defended her relationship with Sidney Blumenthal, a longtime friend and confidant who was paid by the Clinton Foundation and offered her advice about the situation in Libya while she served as secretary of state.

“I have many, many old friends and I always think that it’s important when you get into politics to have friends you had before you were in politics and to understand what’s on their mind,” she said. (Mr. Blumenthal served as an adviser to President Bill Clinton in the White House and has been close to the Clintons since.

Posted by VIRGINIA BERGMAN at 6:16 PM