The Palin and Trump resentment voters 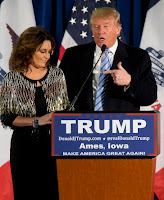 During a phone call last night, an old friend and I puzzled over the scary phenomenon of the growing number of Trump supporters who buy into their idol’s bigotry toward anyone different from them, e.g., Syrian refugees, immigrants from Mexico, etc. My friend and I wondered about the source of their vehement hatred of “the other.” Today, I came across a possible answer in an item in Politico by Nick Gass.

"With his call to deport illegal immigrants, especially because Mexico sends us its 'bad ones,' his proposal to bar Muslims from entering the country, his emphasis on the threats to lawful gun ownership and his promise to protect American goods and workers from China, Mr. Trump is riding the wave of anxiety that Ms. Palin first gave voice to as Senator John McCain’s running mate," Wallace wrote. "Mr. Trump has now usurped and vastly expanded upon Ms. Palin’s constituency, but the connection between the two movements is undeniable."

“Palin, Wallace continued, ‘owned the resentment voters’ in her party, a torch that has seemingly been passed to Trump.
”

And that’s the answer my friend and I were puzzling over – Palin and Trump supporters are the “resentment voters.” It figures, doesn’t it? But the next question is how to connect with those who feel disenfranchised and lead them toward more positive solutions to their life challenges.