Why Obama can kill Americans 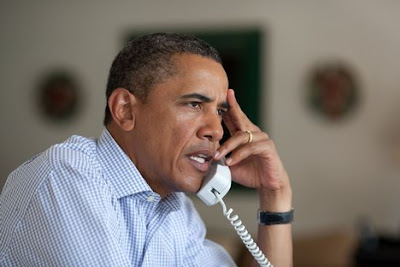 With the assassination of Anwar al-Awlaqi has Barack Obama set a precedent that hereafter will allow U.S. presidents to kill Americans anywhere in the world without due process? That’s what the Department of Justice’s secret memo suggests. This is scary stuff.
Conor Friedersdorf at the Atlantic has the story:
Outside the U.S. government, President Obama's order to kill American citizen Anwar al-Awlaki without due process has proved controversial, with experts in law and war reaching different conclusions. Inside the Obama Administration, however, disagreement was apparently absent, or so say anonymous sources quoted by the Washington Post. "The Justice Department wrote a secret memorandum authorizing the lethal targeting of Anwar al-Aulaqi, the American-born radical cleric who was killed by a U.S. drone strike Friday, according to administration officials," the newspaper reported. "The document was produced following a review of the legal issues raised by striking a U.S. citizen and involved senior lawyers from across the administration. There was no dissent about the legality of killing Aulaqi, the officials said."
Isn't that interesting? Months ago, the Obama Administration revealed that it would target al-Awlaki. It even managed to wriggle out of a lawsuit filed by his father to prevent the assassination. But the actual legal reasoning the Department of Justice used to authorize the strike? It's secret. Classified. Information that the public isn't permitted to read, mull over, or challenge.
Read more:
Posted by VIRGINIA BERGMAN at 8:57 AM