What if GW Bush – instead of Obama – had done that? 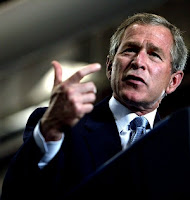 Politico’s Josh Gerstein asks a question that should trouble all Americans, but especially those who feverishly supported candidate Obama in 2008 as he railed against his predecessor’s “failed policies of the past.” Gerstein wants to know, “What if Bush had done that?” And he notes in passing how the media shapes public opinion to support its pre-established narrative – it’s good to have that reality publicly acknowledged.
Gerstein writes (emphasis mine):
President Barack Obama has forged a surprising consensus on opposite ends of the political spectrum: They wonder how on earth he gets away with it.
A series of recent moves — from aggressively filling his reelection war chest to green-lighting shoot-to-kill orders against an American terror suspect overseas — would have triggered a massive backlash if George W. Bush had tried them, say former Bush administration officials and a few on the political left. Even Obama’s love for the links draws only gentle ribbing rather than the denunciations that helped drive Bush to give up the game for the balance of his presidency.
The muted public response has fueled frustration – and more than a little envy.
“A little bit of consistency from the media would be appreciated — and from the left-wing groups,” said Mark Corallo, director of public affairs at the Justice Department from 2002-05. “I don’t see anybody standing up. … Where is the outrage?”
Salon columnist Glenn Greenwald, an icon of what the Obama White House famously dubbed “the professional left,” also sees a strange lack of interest toward some of Obama’s policies. Among them: his administration’s claim that the Constitution allows executive use of armed drones to kill U.S. citizens abroad deemed to be terrorist operatives.
“Virtually all the Democrats who were apoplectic about Bush and were constantly complaining about him ‘trampling on our values’ over eavesdropping and detention have been silent about assassination, even though it’s so much more severe,” Greenwald said. “It isn’t that Obama is necessarily any worse on civil liberties than Bush. The point is he’s able to get away with so much more.”
A White House spokesman declined to comment for this story. But Obama aides have noted that he takes plenty of heat for other policies — such as expanding entitlements or phasing out traditional light bulbs — that were far less controversial when Bush did them. Obama’s recent decision on contraception and religious employers triggered a political firestorm, but a similar policy in place throughout the Bush administration barely registered on the political radar.
Some differences in coverage flow from a simple truth: Stories that feed an established media narrative about a political figure get more attention than those that cut against it. And the press tends to blow up stories when partisans attack one another. Some of Obama’s practices, particularly in the war on terror, are supported by Republicans — even as they cringe at the unanimity.
Read more:
Posted by VIRGINIA BERGMAN at 9:17 AM