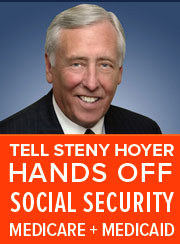 Surprise, surprise! Corporatist Dems are once again joining with their Tea Party brethren to sabotage the self-funded Social Security program, as well as Medicare, and Medicaid, which they and the corporate-owned media refer to condescendingly as “entitlements.”

Never will they admit that it’s the one percent in America who are truly the “entitled.”

I signed the petition below, and I’m hoping Katalusis readers will take this opportunity to protest yet another brutal attempt to destroy the safety net of the elderly and the poor.