What you desperately need to know about Senate candidate Elizabeth Warren??!! 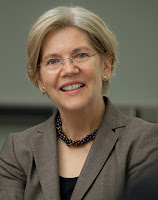 Yesterday I posted about the media’s classism and sexism in its coverage of the exalted Kennedy men while discounting lesser mortals like Bill Clinton and Mary Richardson Kennedy.
Today, Michael Tomasky at the Daily Beast notes the media’s magnification of supposed sins of public figures like Bill Clinton and Elizabeth Warren as readers of esteemed journals, e.g., the Boston Globe, yawn while pitching their papers into recycling bins.
Tomasky writes:
So now Elizabeth Warren has to prove that she’s 1/32nd Cherokee? The temperature on the story is rising. There was a huge article in the Boston Globe on Friday written to raise a number of questions and suggest that Warren used the minority designation to get her job, or get ahead—exactly at the same time that a poll was released (PDF) showing that 69 percent of Bay State voters don’t consider her heritage to be a “significant” story. It reminds me of nothing so much as Monica Lewinsky, and of the media’s need sometimes to get a grip.
Why Lewinsky? The situations are in fact almost precisely the same. You had then a press pack that had decided that whether Bill Clinton was telling the truth about Monica was a question on which the fate of the republic hinged. The press became self-righteously consumed with its search for The Truth. Meanwhile, outside the Beltway, and outside of Wingnuttia (it existed then, just at about half of its current GDP), nobody cared what the truth was. The media kept producing revelations; surely, now, swore Maureen Dowd and Michael Kelly, America will see this man for the reprobate he is! America looked, yawned, told the press to start acting like grownups, and continued to approve of the job Clinton was doing as president at rates near 70 percent and to oppose impeachment at similar levels.
The appearance Thursday morning of this Suffolk University poll (linked to above) made me think: Well, this story line is about to wrap up. If more than two-thirds of voters don’t care, then that’s that. But no—still going strong! And now it’s not the loopy, right-wing, and pro-Brown Herald, which pushed the story first, but the Globe trying to play catch up. Yes, yes, it’s all in the public interest. What, you say, the public says it isn’t interested? Well, we’ll teach them what’s in their interest!
Read more:
Posted by VIRGINIA BERGMAN at 8:35 AM