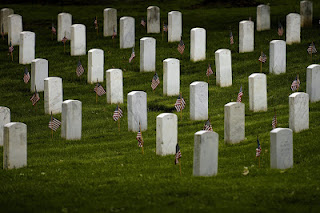 Gallup’s headline for its recent poll of military veterans is misleading. Not all veterans - only male veterans - support Romney 58% to 34%.
As a veteran of the U.S. Air Force (WAF), I was annoyed at having to read down a couple of paragraphs in Gallup’s report to find that women veterans support Obama 47 to 42.
Full disclosure: I served in the military for primarily one reason: I came from a poor family and hoped to attend college on the GI bill.
Perhaps we should remind ourselves on Memorial Day that it is usually the poor who fight our wars.
It was peacetime when I served, and I tuned out the “kill or be killed” indoctrination in basic. And I later took advantage of the education benefits to earn a BA degree.
Conventional wisdom has it that military personnel and veterans of the armed forces typically cultivate a macho culture. In that light, it’s puzzling that such a large percentage of the guys pick Romney over Obama, neither of whom has served in the armed forces.
Surely, the Obama Administration has been more ruthless than the Bush Administration in its prosecution of war, incessant drone attacks - irregardless of civilian deaths - and take no prisoners strategy in dealing with terrorists.
On the other hand, although Obama’s attitude toward women can be condescending at times, he is more progressive on matters affecting women’s rights than Romney and company. Even so, women vets in this poll don’t give him much of a lead.
Read Gallup’s full report here:
Posted by VIRGINIA BERGMAN at 9:59 AM