Elizabeth Warren: “Who I am” 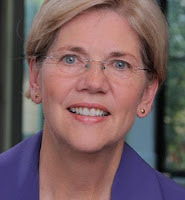 With a big assist from the media – always eager to make something out of nothing – Sen. Scott Brown (R) and company have been doing their best to sabotage Elizabeth Warren’s campaign in the Mass. Senate race. The race is close, so apparently anything goes from the Republican side.
The letter from Warren pasted below should put an end to the nonsense regarding her Native American heritage, but then she’s instilled a lot of fear in the 1 percent, so we can only hope. Clearly, Warren needs our help to overcome the Rovian tactics and monetary support that she’s up against. Let’s give her a hand:
Virginia,
When I was a little girl, I learned about my family's heritage the same way everyone else does -- from my parents and grandparents.
My mother, grandmother, and aunts were open about my family's Native American heritage, and I never had any reason to doubt them.
What kid asks their grandparents for legal documentation to go along with their family stories? What kid asks their mother for proof in how she describes herself?
My heritage is a part of who I am -- and I am proud of it.
But that's not good enough for Scott Brown and the Republican Party. For several weeks now, they have orchestrated an attack against my family, my job qualifications, and my character. Earlier today, Scott Brown even questioned the honesty of my parents -- even though they are not fair game and are not here to defend themselves.
Scott Brown wants me to give up my family and forget where I came from. I'm not doing that -- not for politics and not for anything else. I'll hold on to every memory I can. My family is part of who I am, and they will be part of who I am until I die.
Despite evidence to the contrary, Scott Brown also claims I got special breaks because of my background. That's not true, and I need your help to fight back:
I decided to run for the U.S. Senate because the middle class in this country has been hacked at and hammered at and because Washington doesn't get it.
Scott Brown has a very different vision about who we are as a people, and he votes to make sure the levers of power in Washington continue to work for the big, the powerful and the wealthy.
If everyone in Massachusetts knew where Scott Brown stands on the important issues, voters wouldn't give him a second term in the U.S. Senate. You know that, I know that, and he knows that, too.
That's why he has worked so hard to make this campaign about anything else -- even my heritage. It's why his campaign spends so little time on what Massachusetts voters are really concerned about.
On Election Day, we will prevail because our vision is clearer and our ideas are stronger. We are focused on the issues important to middle class families, and our grassroots team will make sure everyone knows about those issues. I need your help to keep fighting the smears, spread the truth, and help us organize to win.
Thank you for being a part of this,
Elizabeth
DONATE
Posted by VIRGINIA BERGMAN at 2:38 PM