No clear win for Obama in last night’s debate 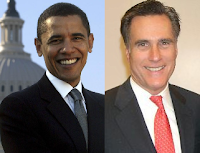 Forgive me but I didn’t see last night’s debate as a clear win for the president. In my opinion, Obama and Romney were pretty evenly matched, while debate moderator Crowley sounded whiney most of the time.

The Washington Post’s Stephen Stromberg was also unimpressed, but he did give the edge to Obama:

President Obama might have saved his campaign at Tuesday night’s presidential debate. Not that his performance was all that great.

At the first presidential debate two weeks ago, Obama seemed prickly and disengaged. This time around, he retired the arrogant grin and delivered his lines with force. He did voters the courtesy of bringing his A game, instead of conceited complacency. Mitt Romney, meanwhile, went from confident and affable two weeks ago to defensive and pushy Tuesday night. He often sounded flustered, even repeatedly arguing petty points of procedure with moderator Candy Crowley. By the end of the debate, members of the
audience clapped after Crowley called Romney on a fact he got wrong.

Obama also did a better job hitting Romney on a few matters of substance. The president calmly added up the numbers in Romney’s mathematically-challenged tax plan, insisting that Romney the investor would never accept such a “sketchy” deal. Romney’s response to the criticism of his numbers was about as convincing as his usually are: “Of course they add up,” he insisted, following that with no plausible reason to believe him.

Posted by VIRGINIA BERGMAN at 6:55 AM