It's "Mr. President," not "Your Highness" 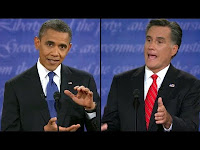 Regardless of party, anyone who witnessed the 08 primaries and general election and subsequent coverage of the Obama Administration is aware of how the media has continued to pamper Barack Obama, despite his inaccessibility. In the aftermath of the first presidential debate in 2012, it comes as a surprise to see how unanimous the punditry has been in its negative critique of the incumbent's performance. The Washington Post's Dana Milbank has a message for Obama:


Barack Obama received a valuable reminder in his drubbing at Wednesday night’s debate: He is a president, not a king.

In the hours after the Republican challenger Mitt Romney embarrassed the incumbent in their first meeting, Obama loyalists expressed puzzlement that the incumbent had done badly. But Obama has only himself to blame, because he set himself up for Wednesday’s emperor-has-no-clothes moment. For the past four years, he has worked assiduously to avoid being questioned, maintaining a regal detachment from the media and other sources of dissent and skeptical inquiry.

Obama has set a modern record for refusal to be quizzed by the media, taking questions from reporters far less often than Ronald Reagan, George H.W. Bush, Bill Clinton and even George W. Bush. Though his opponent in 2008 promised to take questions from lawmakers like the British prime minister does, Obama has shied from mixing it up with members of Congress, too. And, especially since Rahm Emanuel’s departure, Obama is surrounded by a large number of yes men who aren’t likely to get in his face.

Posted by VIRGINIA BERGMAN at 8:29 AM