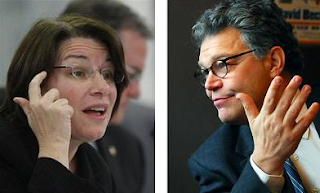 NY Times columnist Tom Friedman's report on a recent visit to his hometown in Minnesota reiterated all of the reasons this native Ohioan fell in love with the North Star state back in the 60s when I moved here with my husband and our two kids. Friedman describes changes in St. Louis Park, the suburb where he was born and raised, but the principles espoused by state political leaders like Klobuchar and Franken have long been upheld here:


I was debating whether to go to the Turkish-Syrian border this week or to visit my old high school in Minnesota. I decided to make the exotic foreign trip and go to Minnesota. I thought it might be useful to look at this election through the window of my hometown of St. Louis Park. I have not been disappointed. I found in this little suburb of 45,250 people outside of Minneapolis — which was memorialized in the movie, “A Serious Man,” directed by the Coen brothers, who also hail from here — all the key trends impacting America.

For starters, there is the changing face of the town. We had two African-Americans among the 2,500 students at St. Louis Park High when I graduated in 1971, and everyone there was either Christian or Jewish. When I walked through the high school cafeteria on Monday, there were six teenage girls covered in colorful Muslim hijabs and the principal, Robert Metz, explained to me that “today we have more Muslim students than Jewish students.” This is the byproduct of the huge influx of Somali refugees to Minnesota. Metz said my old high school, which now has open enrollment and competes for students from around Minneapolis, attracts young people both for its academic rigor and because they want to go to a richly diverse school that mirrors the world in which they’ll be working. There are more than 30 languages spoken in the elementary school near my old house — exactly 29 more than when I lived here.

Posted by VIRGINIA BERGMAN at 9:41 AM