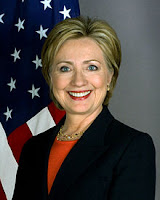 Hillary Clinton will continue to serve as secretary of state until the end of January when her successor John Kerry will take over.This is good news for it will give Hillary the opportunity to say a proper good by to the State Department and the Obama Administration before departing for a much needed rest. In the meantime, of course, her fans continue to urge her to run for president again in 2016.

Mark Landler at the NY Times reports that  Hillary's recent concussion and subsequent blood clot have added to fears that her work has "taken its toll." Landler writes:


WASHINGTON — When Secretary of State Hillary Rodham Clinton fractured her right elbow after slipping in a State Department garage in June 2009, she returned to work in just a few days. Her arm in a sling, she juggled speeches and a trip to India and Thailand with physical therapy, rebuilding a joint held together with wire and pins.

It was vivid evidence of Mrs. Clinton’s indomitable stamina and work ethic — as a first lady, senator, presidential candidate and, for the past four years, the most widely traveled secretary of state in American history.

But after a fall at home in December that caused a concussion, and a subsequent diagnosis of a blood clot in her head, it has taken much longer for Mrs. Clinton to bounce back. She was released from a hospital in New York on Wednesday, accompanied by her daughter, Chelsea, and her husband, former President Bill Clinton. On Thursday, she told colleagues that she hoped to be in the office next week.

Her health scare, though, has reinforced the concerns of friends and colleagues that the years of punishing work and travel have taken a heavy toll. Even among her peers at the highest levels of government, Mrs. Clinton, 65, is renowned for her grueling schedule. Over the past four years, she was on the road for 401 days and spent the equivalent of 87 full days on a plane, according to the State Department’s Web site.

Posted by VIRGINIA BERGMAN at 8:33 AM