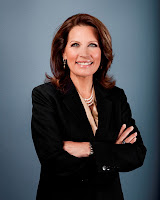 Confession: I'm a Minnesotan, but I've never paid much attention to Sixth District Representative Michele Bachmann. Come to think of it, I'm in sync with DNC member and fellow Minnesotan Rick Stafford's Facebook response to the news that Bachmann is dropping out of the 2014 race: "It's a great day in Minnesota! The sun is out. Bachman announces her retirement from spreading falsehoods! —

The editorial board of the Minneapolis Star Tribune explores further what Bachmann's exit means for the state of Minnesota:

Republican Rep. Michele Bachmann announced her 2014 exit from Congress with a political grace too seldom seen in the seven years she has controversially served Minnesota’s Sixth District in Washington, D.C.

Wednesday’s surprise release of a video in which the Tea Party firebrand said she will not seek a fifth term was classic Bachmann, with its flattering lighting, tightly controlled message and impeccable predawn timing designed to maximize morning news headlines and, by extension, energize her personal brand.

But the broader timing, to Bachmann’s credit, also benefits her political party and, more important, the voters in her Republican stronghold of a district. They now have an opportunity to elect a more effective and credible representative.

Coming well more than a year before the 2014 election, Bachmann’s announcement gives the GOP ample time to find and fund a strong new candidate — one capable not only of winning next year but of leveraging this solidly Republican seat to become a forceful advocate for constituents and a next-generation national leader for the party.

Posted by VIRGINIA BERGMAN at 11:14 AM