Hillary: Fixing the economy requires getting into corporate boardrooms 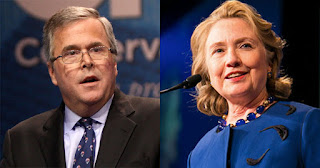 Sounds obvious doesn't it? Fixing the nation's economy requires "getting into corporate boardrooms and making changes there."  Leave it to Hillary Clinton to point that out to Jeb Bush and her other would-be opponents in 2016. (We're assuming here that Hillary will be the Democratic nominee.)

In her economic speech today, Hillary gave a preview, not only of her positions on economic matters, but also how she will respond to the likes of Jeb Bush in 2016:

Jeb Bush got a lot of attention last week when he suggested that Americans who want higher living standards need to work harder.

During a speech on Monday, Hillary Clinton happily served up a rejoinder: It’s the people running companies, not their workers, whose behavior needs to change.

In making this argument, Clinton wasn’t simply taking a swipe at a potential rival in the 2016 presidential election. She was embracing a critique that economists and even some prominent investors have been making with increasing urgency -- that corporate America’s focus on maximizing short-term profits has come at the expense of worker pay and, ultimately, the economy as a whole.
It’s an argument that Clinton is likely to keep making, no matter who becomes the Republican nominee.

Campaign officials had billed the speech, delivered at the New School for Social Research in New York City, as a major economic policy address -- Clinton's first since she officially announced her candidacy in April. The goal wasn’t to dwell on any one proposal in particular, campaign advisers stressed, but rather to sketch out, in broad terms, how Clinton would try to raise incomes and improve economic security for the middle class and poor.

What followed was a laundry list of proposals -- including a bunch that have been the focus of recent economic policy debates in Congress, like creating an infrastructure bank and raising the minimum wage. Others, like increasing support for childcare and paid sick leave, are only now getting serious attention in Washington.

Posted by VIRGINIA BERGMAN at 6:07 PM