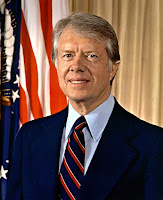 For years, President Jimmy Carter has been the victim of trash talk from even his fellow Democrats. At the age of 90 and recently diagnosed with cancer, Carter is finally being recognized for the powerful and inspiring example he has been, not only for Americans, but for people around the globe. This article by Leonard Pitts on Carter's faith is well worth reading:


America is a nation of faith. So it is often said.

In faith, a baker refuses to bake a cake for a gay couple’s wedding. In faith, a minister prays for the president to die. In faith, terrorists plant bombs at the finish line of a marathon. In faith, mosques are vandalized, shot at and burned. In faith, a televangelist asks his followers to buy him a $65 million private jet.

And no one is even surprised anymore.

In America, what we call faith is often loud, often exclusionary, sometimes violent and too frequently enamored of shiny, expensive things. In faith, ill-tempered people mob the shopping malls every year at Christmas to have fistfights and gunfights over hot toys and highend electronics.

You did not hear much about faith last week when Jimmy Carter held a news conference to reveal that he has four spots of cancer on his brain. The 39th president made only a few references to it in the nearly 40 minutes he spoke, and they were all in response to reporter’s questions. Yet, you would be hard-pressed to find a more compelling statement of belief in things not seen. Unsentimental, poised and lit from within by an amazing grace, Carter discussed the fight now looming ahead of him, the radiation treatments he will undergo, the need to finally cut back on his whirlwind schedule.
He smiled often. “I’m perfectly at ease with whatever comes,” he said, in such a way that you believed him without question. And it was impossible to feel sorry for him.

Read More:
Posted by VIRGINIA BERGMAN at 8:40 AM