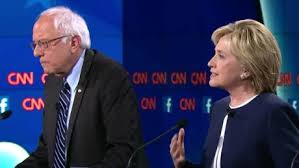 Both the media and its followers have begun catching on that self-proclaimed Saint Bernie Sanders is not so saintly after all. I watched the PBS News Hour last night that has often displayed a bias against Hillary and Bill Clinton. During the Analysis of David Brooks and Mark Shields, Shields mentioned Saint Bernie's "bogus" charge that Hillary Clinton accepts money from the fossil fuels industry. Shields had done the research: Hillary's campaign has accepted a grand total of 15 hundredths of one percent of its funding from the fossil fuels industry. Shields also noted that the Sanders campaign has accepted a bit more funding from that much maligned industry than Hillary's campaign.

Yesterday, in his blog The Conscience of a Liberal, Paul Krugman, a Nobel Prize winning economist, urged Saint Bernie to start behaving responsibly. Krugman calls Bernie out for spouting innuendo about Hillary Clinton and for not sharing his massive fundraising resources with down ballot Democrats - folks from the party Bernie admittedly joined solely for its backing of his presidential candidacy.

In his blog post, "Feel the Math," Krugman writes:


The Sanders campaign has come much further than almost anyone expected, to the point where Sanders can have a lot of influence on the shape of the race. But with influence comes responsibility, and it’s time to lay out some guidelines for good and bad behavior.

The first thing to say is that it’s still very unlikely that Sanders can win the nomination. Don’t tell me about national polls (and cherry-pick the polls that show your guy getting close); at this point it’s all about delegate counts, where Clinton has a substantial lead with the voting more than half over. The Times’s Upshot has a nice calculator that takes account of what we know about demographic factors – Sanders does well in very white states and in caucuses, not so much elsewhere – and lets you experiment with various overall leads in what remains of the race. To overtake Clinton in pledged delegates, Sanders would need to win by about a 13 point margin from here on in:

Nothing in what we’ve seen so far suggests that he’ll come anywhere close to that. He’ll probably win Wisconsin next week, but that’s a demographically favorable state for him, so unless it’s a huge blowout (which the polls aren’t showing), Clinton will still be very much on track for the nomination.
Now, as the bumper stickers don’t quite say, stuff happens. But at this point it’s something like a 90 percent probability that Hillary Clinton will be the Democratic nominee. Anyone denying that arithmetic is basically pulling a con job on Sanders supporters.

So what does that say about appropriate behavior on the part of her rival? Two things, I’d argue.

Posted by VIRGINIA BERGMAN at 8:06 AM