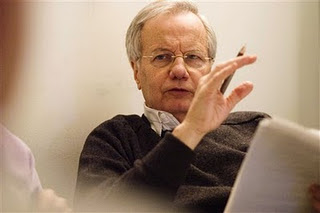 This article by the venerable Bill Moyers at the Nation is a must read for anyone concerned about our corporate-driven government and economic system. It’s enough to startle even the most cynical among us, and Moyers doesn’t back off from either the “hypocritical” Obama Administration or our bought and paid for congressional leaders:
Moyers begins:
During the prairie revolt that swept the Great Plains in 1890, populist orator Mary Elizabeth Lease exclaimed, “Wall Street owns the country…. Money rules…. Our laws are the output of a system which clothes rascals in robes and honesty in rags. The [political] parties lie to us and the political speakers mislead us.”
She should see us now. John Boehner calls on the bankers, holds out his cup and offers them total obeisance from the House majority if only they fill it. Barack Obama criticizes bankers as “fat cats,” then invites them to dine at a pricey New York restaurant where the tasting menu runs to $195 a person.
That’s now the norm, and they get away with it. The president has raised more money from employees of banks, hedge funds and private equity managers than any Republican candidate, including Mitt Romney. Inch by inch he has conceded ground to them while espousing populist rhetoric that his very actions betray.
Read more:
Posted by VIRGINIA BERGMAN at 12:18 PM