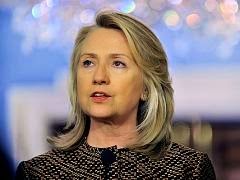 Nothing like the will of the people to foil the virulent Hillary Haters and their contrived email/Benghazi - whatever - scandals. Jennifer Agiesta, CNN Polling Director, has the latest word, and guess what - Hillary is still head of the pack in both parties for 2016:

Washington (CNN)Hillary Clinton continues to be a dominant force heading into the 2016 presidential election, according to a new CNN/ORC poll. The former secretary of state maintains a broad lead over the field of potential Democratic challengers she could face in a nomination contest and sizable advantages over the leading contenders from the Republican side in general election match-ups.
Former Florida Gov. Jeb Bush tops the possible field for the Republican Party's nomination race, followed by Wisconsin Gov. Scott Walker, Kentucky Sen. Rand Paul, former Arkansas Gov. Mike Huckabee and former neurosurgeon Ben Carson all in a tight cluster.

But none of the top candidates in this field gets within 10 points of Hillary Clinton in a series of hypothetical general election matchups.

Rand Paul comes closest, with 43% saying they'd be more likely to back him while 54% choose Clinton. The two candidates who currently top the GOP field, Bush and Walker, match up equally against Clinton, with each carrying 40% to her 55%. Huckabee gets 41% to Clinton's 55% and Carson has 40% to Clinton's 56%.

In the race for the Democratic presidential nomination, Clinton holds a nearly 50-point lead over Vice President Joe Biden, her closest competitor in the field, 62% to 15%. Massachusetts Sen. Elizabeth Warren rounds out the top three on the Democratic side with 10%. No other potential candidate tops 5%.

Posted by VIRGINIA BERGMAN at 3:21 PM