Teaching Democrats to fight for working class people once more 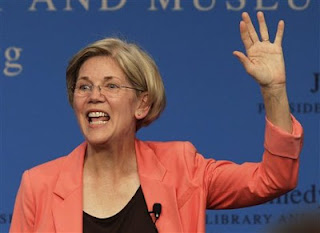 Elizabeth Warren is waging a tough campaign against incumbent Scott Brown in the Mass. senate race. We can only hope Warren wins. It’s time for someone who understands economics and gets what working class people are up against to assume a leadership role in Congress.

In her weekly column for the Washington Post, Katrina vanden Heuvel describes Warren as the people’s champion:

She called herself the “warm-up act” for Bill Clinton at the Democratic Convention, but Elizabeth Warren electrified the crowd by delivering the fierce heat of the truth straight from the heart:

“People feel like the system is rigged against them. And here’s the painful part: they’re right. The system is rigged. Look around. Oil companies guzzle down billions in subsidies. Billionaires pay lower tax rates than their secretaries. Wall Street CEOs — the same ones who wrecked our economy and destroyed millions of jobs — still strut around Congress, no shame, demanding favors and acting like we should thank them. Anyone here have a problem with that? Well I do.”

Running for the Senate against a popular incumbent in Massachusetts, Warren is an unlikely candidate. She’s a Harvard law professor, and looks the part with her glasses and no nonsense hair, and sounds it as she speaks naturally in full paragraphs, not sound bites. She made her name studying bankruptcy laws, and exposing how that system was rigged against the struggling middle class families who hit the wall after an illness or the loss of a job.

Read more:
Posted by VIRGINIA BERGMAN at 8:55 AM