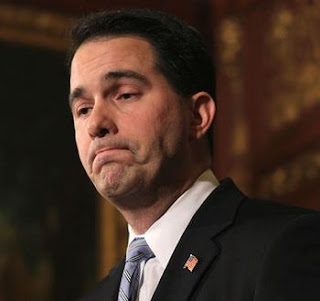 Wisconsin Governor Scott Walker starred at the Republican convention  just days ago. Convention attendees celebrated the young governor’s apparently successful attacks on the rights of public service employees.
Yesterday, a Wisconsin circuit court judge pulled the rug out from under Walker, and  it was time for the state’s educators, police, firefighters, et al to celebrate:
A Wisconsin judge on Friday struck down the state law championed by Gov. Scott Walker that effectively ended collective bargaining rights for most public workers.
Dane County Circuit Judge Juan Colas ruled Friday that the law violates the state and U.S. constitutions and is null and void.
The law took away nearly all collective bargaining rights from most workers and has been in effect for more than a year.
Read more:

Posted by VIRGINIA BERGMAN at 9:26 AM