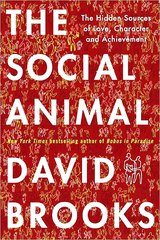 The urbanity of NY Times columnist David Brooks, author of The Social Animal: The Hidden Sources of Love, Character and Achievement, conceals at times the underlying crassness of his positions on issues, e.g., when he glibly spouts psychological nonsense in support of arming the populace. Allen Frances, professor emeritus of Duke University, would like a word with Brooks:

What Brooks doesn't know about psychology is a lot. Everything he says about it has a shallow ring, is misinformed, and displays the same bias and ulterior motive. Brooks is a complacent apologist for the status quo. Whenever events scream out that there is an obvious defect in one of his cherished social policies, Brooks comes to its defense with a muddled pop psychological explanation -- hoping in the process to deflect attention away from any serious policy discussion of what has gone wrong and what can be done to correct it. The consistent tactic is to rationalize a failing public policy by putting all the blame on messed up individual psychology.

Posted by VIRGINIA BERGMAN at 8:33 AM