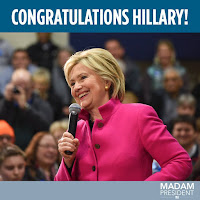 In reporting the results of the Iowa Caucus, Huffpo reminded its readers: "The Iowa Democratic Party doesn't report vote counts. It reports State Delegate Equivalents (SDEs), predictions of who will attend the state-wide party convention." Most reporting sites agree this morning that Hillary Clinton garnered 701 SDEs; whereas, Bernie Sanders emerged with 697 SDEs. That translates into 28 delegates for Clinton and 21 for Sanders.

In other words, although Bernie Sanders claims it was a tie, others disagree:  NBC News said:  "Based on the report from the Iowa Democratic Party Chair, we have marked Hillary Clinton as the apparent winner. The party described the race as a 'historically close caucus."

In the run up to the Iowa Caucus, I kept encountering Bernie's angry face in his online ads - his perpetual scowl with arms waving as he rants and raves at the top of his lungs. Each time, I've been reminded of his attempt to put Hillary Clinton down back in October 2015 by telling her in reference to her position on gun control: “all the shouting in the world” won't fix the issue."

I imagine Bernie is convinced that his ranting and raving and promise to start a revolution will fix not only all of America's problems, but the world's problems as well.  Maybe his inexperienced youthful followers - with all of their enthusiasm - can swallow his pitch, but for the rest of us, Bernie's unrelenting shouting is quickly growing old.

Posted by VIRGINIA BERGMAN at 12:41 PM