One dollar and one cent for every hour Sen. Davis filibustered 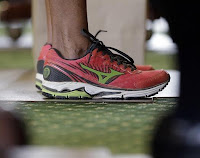 At Heidi Li’s Potpourri, Heidi Li is pointing out that both money and filibustering talk, and she’s urging each of us to follow her example and invest $11.11 in Sen. Davis’ future. Sounds like a worthwhile investment to me. If you want to donate, go to the Texas state senator’s website here.

I do not live in Texas.  I have never met State Senator Wendy Davis.  I just invested $11.11 in her political future. That donation is one dollar and one cent for every hour she stood filibustering a law proposed by the Republican, male governor of Texas, a bill that "would have shut down almost all the abortion clinics in the state, under the guise of expanded health and safety requirements"; a bill that also aims to ban abortion after 20 weeks with no exemption for women who are victims of rape or incest.

Posted by VIRGINIA BERGMAN at 12:26 PM