Rescuing a Subway employee - one of those present moments, wonderful moments! 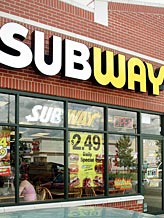 My experience at our local Subway was a little unusual from the start. It was around 5 p.m. yesterday when I stopped to pick up a sandwich on my way home - that would be a six-inch, sweet onion chicken teriyaki sandwich on flat bread. For some reason, though, I paused to review the restaurant’s hours posted outside the door.  My favorite Subway was scheduled to remain open that Saturday night until 11 p.m.

I was the only customer present when I ordered my sandwich. Chatting it up with the two fellows behind the counter, I learned they would be on duty until closing time. One fellow mentioned he broke his ankle the day before and hadn’t been able to find anyone to replace him that evening. When he revealed that he had no pain medication – none whatsoever - I flashbacked to a few months before when due to some serious misunderstandings with my health care team, I was unable to get the pain medication I needed. They were unaware that I was walking around on a fractured left femur (thigh bone). I finally had to go to the emergency room to get the care I needed.

I paid for my sandwich and said to the injured employee, “I know what that feels like. I’m going to get some pain medication for you. I’ll be right back.”

At the nearby Super America, I grabbed a 50-caplet bottle of generic Tylenol and explained to the young woman at the register that I was rescuing a young fellow with a broken ankle behind the counter at Subway. She was all for it. When I told her I didn’t need the receipt, she smiled and said, “Tell him to pay it forward.”

At the restaurant, I continued to think very clearly about how best to handle the situation. There were now several customers lined up at the counter, and I figured my patient would feel compelled to handle each of them before taking his medicine. More intervention was required. I got a glass of water from the soft drink dispenser and breaking into the line, I placed it and the Tylenol on the counter. “Hold on, folks,” I said to the waiting customers, “This man needs some medicine.”

I shall not soon forget the look of relief on the young man’s face as he reached out for the water and Tylenol. (I hope the Tylenol at least took the edge off the pain.) Nor shall I forget the comments I heard from the customers, e.g., a young woman exclaimed, “There are decent people in the world after all!”

When my patient offered to pay for the Tylenol, I told him to pay it forward, which added to his astonishment.

I witnessed a lot of astonishment at the Subway scene last night. Pleased astonishment. It was as if people could not believe anyone would take the 15 or 20 minutes it took to run the errand and spring for the cost of $2.99 for a bottle of generic Tylenol to bring aid and comfort to a suffering worker.

What I remember most about the incident, though, is the clarity with which I seemed to have been led by some unknown presence one step at a time in coming to the employee’s aid.

As I left the store and headed home, I felt buoyed up by all the goodwill from everyone with whom I connected that evening. And I looked forward to putting my feet up and enjoying my sweet onion, chicken teriyaki sandwich on flat bread and two of Subway’s always fresh chocolate chip cookies.

Did I mention I also picked up a nice bottle of wine on my way home?

Posted by VIRGINIA BERGMAN at 3:41 PM