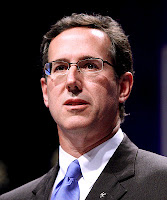 Yesterday, Republicans voted for conservative extremism over sanity and moderation. (Katalusis eschews extremism from either the left or the right.)
Paul Begala at the Daily Beast reports Rick Santorum’s big wins in Missouri, Minnesota, and Colorado:
Rick Santorum's impressive victory in the nonbinding Missouri "beauty contest" began an ugly night for Romney. Mitt, who garnered 29 percent in Missouri in 2008, limped in with 25 percent—fewer than half the votes Santorum earned (55 percent).
Then came Minnesota, where Romney lost again. Big time. He won the state four years ago—earning 41 percent, But Tuesday night, he won only 17 percent, for a stunning third-place finish behind Santorum and Ron Paul.
In case you’re unfamiliar with Santorum’s positions or have forgotten where he stands on important issues, here’s a quick update from his Wiki page:
Santorum holds socially conservative positions, including opposition to same-sex marriage.[2][3][4] On fiscal issues, his record is more mixed; in Congress, Santorum used earmarks and supported big government programs in education and transportation,[5][6] but had a leading role in enacting welfare reform,[7] and voted for tax cuts, a balanced budget amendment, and cuts in entitlement spending.[5][6] As a presidential candidate, he has supported fiscal restraint and a ban on earmarks,[5][6] and has expressed hawkish views on foreign policy, including Iran–United States relations.[8]
Following Obama’s example in 2008, Romney has waffled on some issues in order to woo extremists in his party’s base, but as shown on his Wiki page, the record of the former governor of Mass. tends toward more moderate positions:
Romney was elected Governor of Massachusetts in 2002 but did not seek re-election in 2006. He presided over a series of spending cuts and increases in fees that eliminated a projected $3 billion deficit. He also signed into law the Massachusetts health care reform legislation, which provided near-universal health insurance access via subsidies and state-level mandates and was the first of its kind in the nation. During the course of his political career, his positions or rhetorical emphasis have shifted more towards American conservatism in several areas.
The true believers of extreme conservative dogma continue to dig in and demonstrate their strength as the Republican primary heats up.
Posted by VIRGINIA BERGMAN at 8:44 AM