Commercial drones for hire in the land of the free 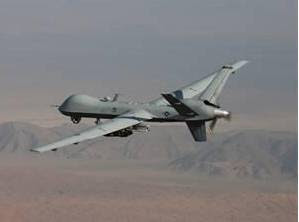 The photo on the right shows an armed drone,
America’s current weapon of choice;
so far, the recently authorized commercial drones are unarmed.
It had to happen, I guess. Once the Obama Administration embraced the hunt down and kill capacity of armed drones in the skies over Pakistan and elsewhere, commercial interests in America would seize on the unmanned aircraft for its own purposes.
And it being an election year and our malleable president eager to please the people with the bucks, it's understandable that he would hasten to sign a law making it legal for your local real estate agent to check out your back yard without your knowledge, much less your permission.
The New York Times reports this morning:
A new federal law, signed by the president on Tuesday, compels the Federal Aviation Administration to allow drones to be used for all sorts of commercial endeavors — from selling real estate and dusting crops, to monitoring oil spills and wildlife, even shooting Hollywood films. Local police and emergency services will also be freer to send up their own drones.
But while businesses, and drone manufacturers especially, are celebrating the opening of the skies to these unmanned aerial vehicles, the law raises new worries about how much detail the drones will capture about lives down below — and what will be done with that information. Safety concerns like midair collisions and property damage on the ground are also an issue.
Read more:
Posted by VIRGINIA BERGMAN at 11:03 AM