Will Obama take his cue from Elizabeth Warren in his reelection campaign? 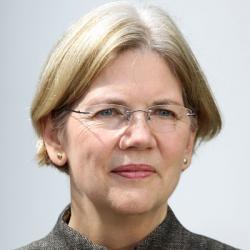 Put aside the fact that President Obama caved to Republican resistance in his failure to nominate Elizabeth Warren to head the Consumer Financial Protection Bureau she created and consider this:
Paul Starobin at the New Republic now suggests that President Obama take his cue from the scrappy defender of the middle class in his reelection campaign.
Pointing out that the women’s vote may be even more critical in 2012 than it was in 2008, Starobin writes:
Elizabeth Warren is poised to thrash Scott Brown in their marquee U.S. Senate race in Massachusetts, and the reason is simple: Women voters love her. In the most recent poll, in December, Warren and Brown were virtually tied amongst men, but Warren led by 13 percentage points, 51 percent to 38 percent, amongst women.
Warren’s commanding lead is not about her gender (Masssachusetts has never before elected a woman to the Senate or governor’s office: Brown defeated Martha Coakley just two years ago) or even her party (the state has a history of voting for GOP moderates like Brown: Think ex-Governor Mitt Romney and, further back, Senator Ed Brooke.) Rather, she owes her ascendency to the fact that her communitarian message resonates so strongly with females.
President Obama ought to pay heed: Warren’s campaign can offer important lessons to his own. He too will need to secure women voters if he wants to earn re-election. And he, too, could do so by adopting Warren’s proud communitarian appeal.
Starobin continues:


THE PUREST DISTILLATION of the Warren message can be seen in the video, shot back in August during her appearance at the Massachusetts home of a supporter, which went viral on the Internet and alternately met with applause amongst liberals and apoplexy amongst conservatives.
It’s easy to see why. With evident passion, Warren weighs in against George Bush’s “tax cuts for the rich” and, hands knifing the air, rejects the notion that she is stirring up “class warfare.” Not at all, she says. “There is nobody in this country who got rich on his own. Nobody. You built a factory out there? Good for you. But I want to be clear: you moved your goods to market on the roads the rest of us paid for; you hired workers the rest of us paid to educate…” It was a riveting performance that proved her skill as a retail politician, someone able to relate to regular folks—there was not a trace here of the Harvard Law professor with a specialty in bankruptcy statutes or the policy wonk whose 5,000 word treatise in Democracy led to the creation of the Consumer Financial Protection Bureau.
According to the Civic Practices Network:

Communitarianism emerged in the 1980s as a response to the limits of liberal theory and practice. Its dominant themes are that individual rights need to be balanced with social responsibilities, and that autonomous selves do not exist in isolation, but are shaped by the values and culture of communities. Unless we begin to redress the balance toward the pole of community, communitarians believe, our society will continue to become normless, self-centered, and driven by special interests and power seeking.

Starobin concludes:
… Communitarianism is not only about ideals, but about practical action. Obama needs to talk more about his particular policy proposals and how they link up with America’s “underlying social contract,” in Warren’s phrase. That’s perhaps the most promising way to reconnect his campaign, so far lacking in any sense of grand aspiration, with its natural demographic base.
Congratulations to Elizabeth Warren for igniting a conversation in the public domain about a too long-neglected topic: the American social contract.
Posted by VIRGINIA BERGMAN at 8:34 AM