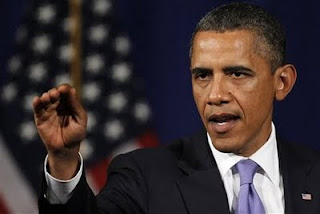 It’s unfortunate that the media is primarily presenting a positive jobs report in terms of the 2012 presidential election campaign instead of first seeking to inform the public of what the new numbers may mean for America’s struggling families.

Politico’s Alexander Burns and Ben White offer a typical analysis of the latest development on the economic front:
President Barack Obama hasn’t unfurled a “Mission Accomplished” banner just yet. But Friday’s jobs report showing unemployment dropping to 8.3 percent, the lowest level of his presidency, is an unexpected boon for Obama’s reelection bid and a serious hurdle for his top competitor, Mitt Romney, who has staked his campaign on a jobs-and-economy message.
While 8 percent-plus unemployment is still a perilous number for any incumbent, the clear downward trend in the jobless rate complicates the Republican narrative that Obama is an out-and-out economic failure who has no hope of turning around the economy.
You have to read further before the article mentions in passing how the recently released jobs numbers might be received by those whom they most critically affect:
“Those numbers are good news for the country and they are good news, politically, for the president,” said Steve Schmidt, who ran John McCain’s 2008 campaign. “It puts particular pressure on Mitt Romney as the nominee to offer a big, bold, sweeping agenda of reform and economic growth and contrasts with the president’s vision. He’s simply not going to be able to run a campaign built on a foundation of criticism.”
Read more:
Posted by VIRGINIA BERGMAN at 7:50 AM