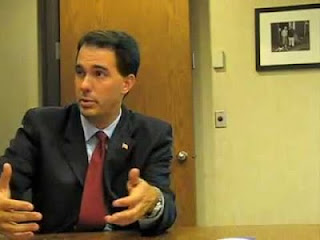 The Caucus (NY Times) reported Friday evening that Wis. Gov. Scott Walker (R) is facing even more problems in addition to a likely recall election:
Scott Walker, the Republican governor of Wisconsin, will meet with a prosecutor who has been investigating the behavior of workers in his previous public office, at the helm of Milwaukee County, Mr. Walker’s campaign office said Friday.
The investigation, which has gone on for 20 months and is seen as a potential problem for Governor Walker in a likely recall election later this year, has led in recent weeks to charges against several close former workers and appointees of Mr. Walker when he served as Milwaukee County executive, before his election as governor in 2010.
The investigation, which led in some instances to charges related to politicking on county time, is secret, so the context of Mr. Walker’s expected conversation with the Milwaukee County district attorney is uncertain.
Read more:

Posted by VIRGINIA BERGMAN at 8:11 PM