Romney projected to win Maryland and DC, leads in Wis. 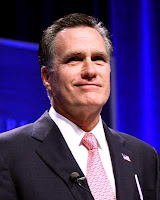 Told ya I’d be back with the Mitt and Rick primary results. Mitt is projected to win in Maryland and DC, and he’s leading in Wis. From the Huffington Post:
The former Massachusetts governor went into the {Wis.} contest leading rival candidates Rick Santorum, Newt Gingrich and Ron Paul, according to the latest polls.
HuffPost's Mark Blumenthal reports:
The Republican race enters April having just passed a significant milestone. As of the Louisiana primary on March 27, GOP presidential primaries or first-round caucuses have been held in 29 states and five territories, enough to account for just over half (52 percent) of the 2,286 delegates who will attend the Republican convention in Tampa, Fla., in August.
Click here for a rundown on who's ahead in the race.
Read more:
Posted by VIRGINIA BERGMAN at 7:47 PM